Connecting with each other with words and pictures is so much more fun than grousing about politics 24/7.  My friend Terry DeWald is one of the leading dealers in Native American material in the world. He is an ex professional baseball player and one of the nicest people you could ever meet. 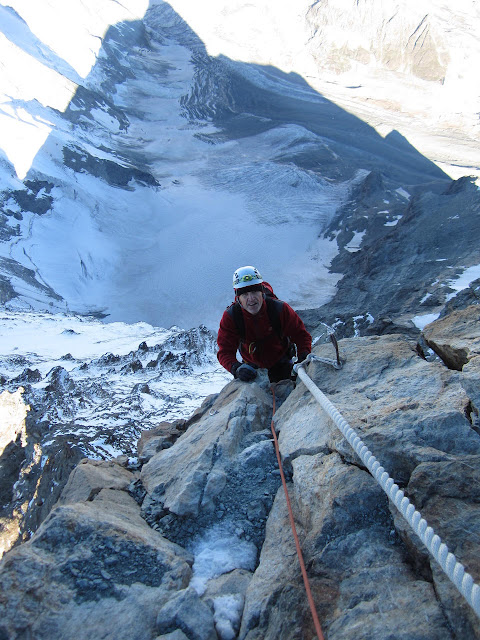 And he likes to climb large mountains in his spare time. Terry has climbed some of the most challenging peaks of Europe including the Monch, Eiger and Jungfrau.

He also likes to read the blast. Had a hard time getting it for a while for some reason.

He sent me this message yesterday, he was going through some photos and was responding to an email I had sent him of a stupid climbing injury I once received at Intersection Rock:

Climbing can be frantic.  I was just going over a few photos of climbing today. 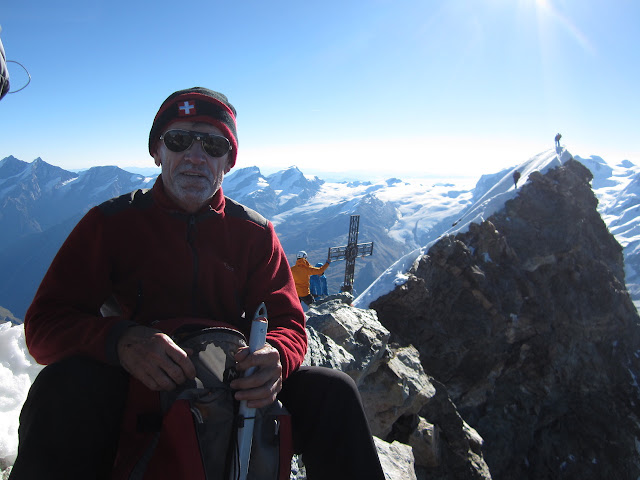 I’ll try to attach a few shots from climbing, then traversing The Matterhorn in a climb I was fortunate enough to experience a few years ago called The Grand Traverse of The Matterhorn where you ascend from Italy and descend into Switzerland.

You have to spend a night on the mountain.  The first shot is just as we are about to summit with me coming up a fixed rope and the shadow of The Matterhorn below me cast from the rising sun that morning.  Next is resting on the Italian summit (which is 1 meter lower than the Swiss summit, and looking cross at the actual Swiss summit.

As cold as it was that morning I would have welcomed a rope burn on my neck to toast things up a bit.

Amazing and Terry was not exactly young during this difficult ascent. He was 67. More of the story here. I think I would make it about fifteen feet. 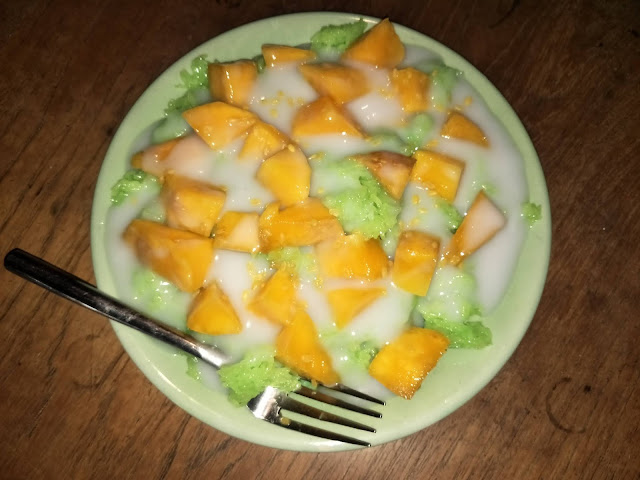 Now Shawn in Thailand might not climb mountains but he does equally crazy stuff in the rain forests and he can whip up a mean mango with green sticky rice and coconut cream, this one inspired by Leslie's recent artistry.

Looks very tasty, Shawn. Does the green rice have a particular distinct flavor? 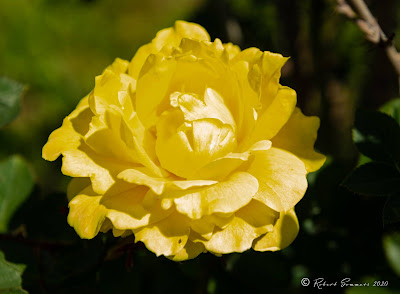 I got my first yellow rose in the garden this week. I am a freak for yellow roses but I dreadfully overexposed this one. I know what I did and will hopefully not repeat my error. 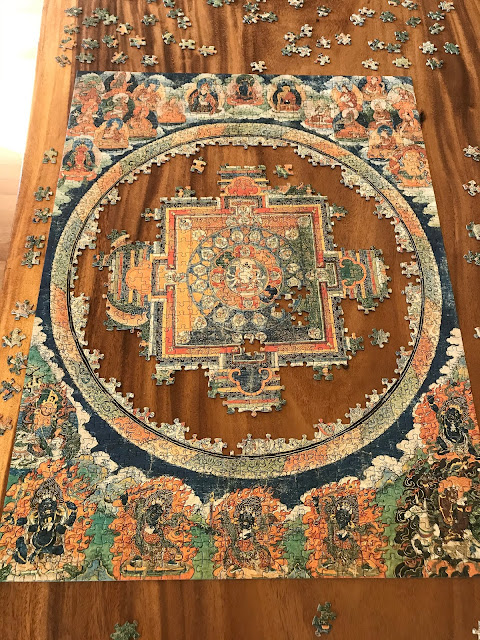 Ron and Lena's jigsaw puzzle is certainly coming together. No word from Michael on his. 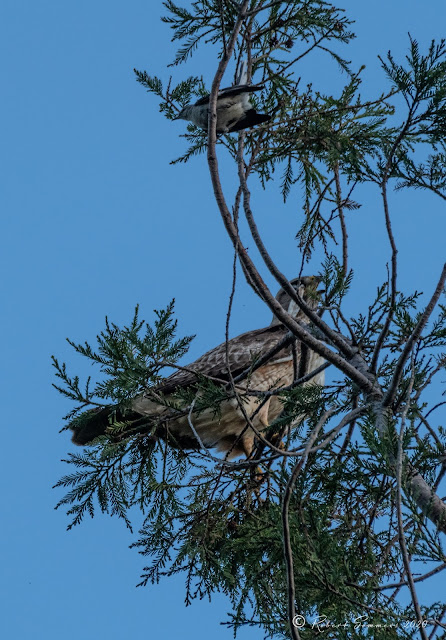 I have been inside way too much, we went out yesterday evening to walk down to the river and I noticed the male red tailed hawk up at the top of my redwood getting mobbed by a mockingbird.

It is amazing how tough those little birds are, they really rule at my place. 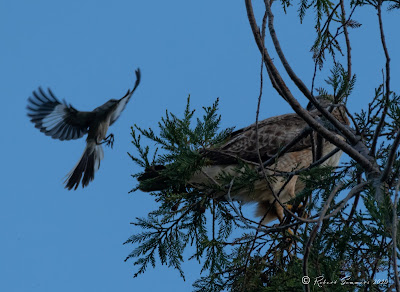 Pops got the message. 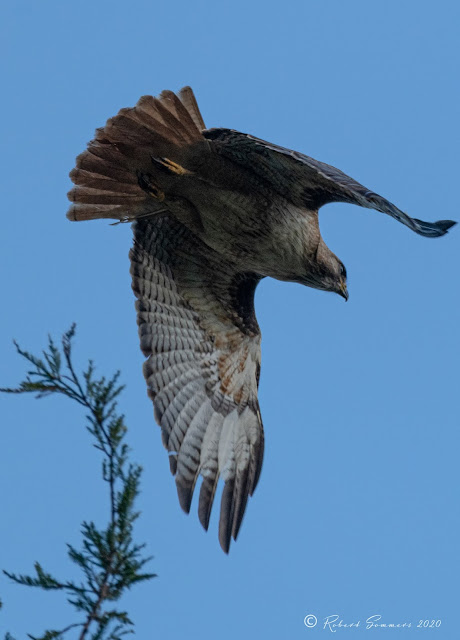 Not a lot too much else going on in the bird front. 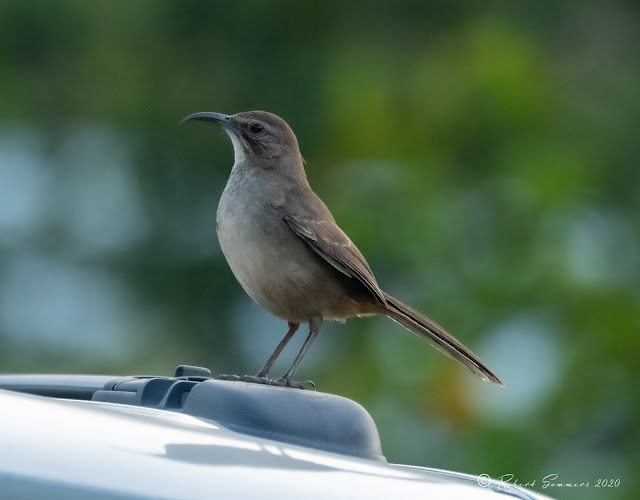 The thrasher decided to hop on my van yesterday evening. We like him a lot.

I have been having these recurring dreams. I am at a Cowboy/Native American antique show, in some beaten up dump of a hall and I have the worst stuff there, am an object of ridicule.

Had another one of these last night. I had this certain type of necklace, everybody wanted the other kind. Fell on my face. Broke, behind the eight ball.

There is a certain amount of terror in being a show dealer and realizing that you are totally outclassed and didn't bring the right thing. Can't find it, can't afford it.

At least I had my clothes on during the dream last night, when I am facing the public and my merchandise is shit and I am standing there in front of them naked in my dream it is even worse. The shame. Why is it always down on my luck Indian shows in my dreams? Where I am just one step away from dying in the sand?

Where is Grumpy, he used to interpret my dreams, hasn't visited the blog in years? Miss him, and Randy and Window Dancer and Beecroft and all the rest of those who have taken their leave. 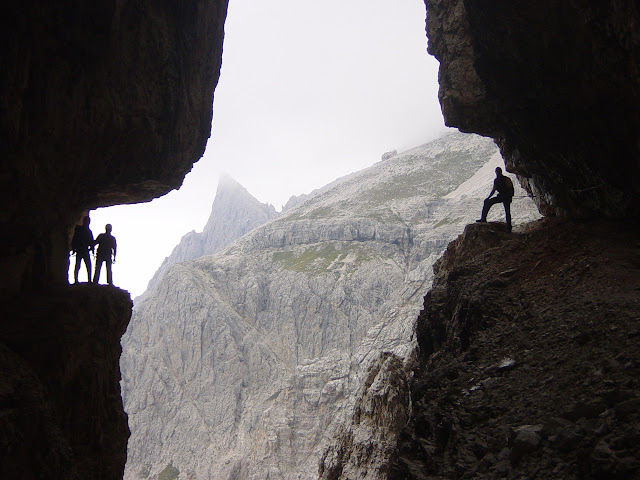 Terry Dewald, his son and another climber from Canada climb the tricky Via Ferrata above Cortina in Italy. They bribed a French climber with a burrito to back into the cave and take their chiaroscuro silhouette. Which is awesome.
Posted by Blue Heron at 2:30 PM