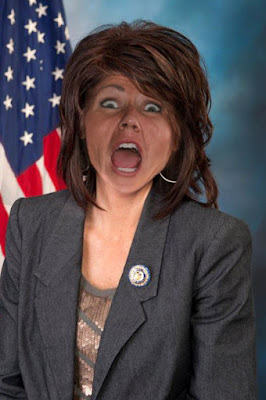 You know I hate being right. Unfortunately it happens to me a lot. I wrote about South Dakota Governor Kristi Noem last week, she of the Michelle Bachmann, deer in the headlights, death stare.

How she seemed to be doing everything exactly the wrong way. And my fear about what was about to happen to the people in her state. And then some anonymous moron wrote to tell me that I obviously knew nothing about South Dakota.


Noem is one of five governors representing relatively rural states — North Dakota, Iowa, Nebraska and Arkansas are the others — still resisting such calls. All are Republicans, and all have used similar justifications for going against the national grain.

But don't worry, her state is going to be the first to hop on the unproven malaria drug bandwagon. And she's even talked with first son in law Jared Kushner on the phone. Dunning Kruger personified. Lemmings, meet cliff.

Her own Republican mayors have begged her to change course. But she won't listen. And she won't issue a stay at home order, because like her fearless leader in Washington, she can not ever admit that she is ever wrong. She says she is "going on offense" instead, with a malaria drug that doctors say can have many horrible side effects, including sudden cardiac death.

*
A commenter on The Hill website came up with my new favorite name for corona virus deniers - Branch Covidians.

*
On a serious note, it is amazing how our country has lagged so far behind much of the rest of the world regarding this crisis. If you look at how many people got tested early on in South Korea versus the United States it is astounding. We could not get out of our own way on this. They worked together, we pitted state against state. We were totally unprepared for a crisis and then too slow to respond. And now we have far more cases than anyone else in the world, 587,752 confirmed as of this evening.

News today that South Korea is sending us 750,000 test kits. How nice and how humiliating. The once greatest nation in the world now having to accept charity from abroad because we are so asleep at the wheel and so ridiculously mismanaged. I read today that in England, which is undergoing a terrible  Covid-19 spike right now along with Russia and Pery, they are now introducing an NHS contact tracing app that will alert users by phone if people they were in anonymous contact with test positive for the virus. Why aren't we doing that here?
Posted by Blue Heron at 7:22 PM