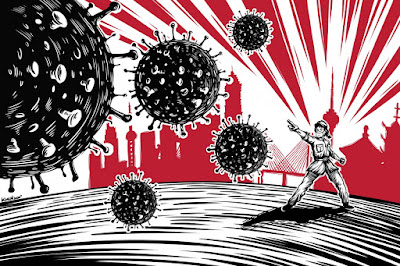 I have been getting a flotilla of emails criticizing China for their behavior in regards to the Corona virus. I get it.

I have no idea if they actually created this nasty microbe in a Wuhan lab or not but I wouldn't necessarily put it past them.

And they probably downplayed the virus in the nascent stages, somewhat like we did.

But is it really constructive to go after them right now? Does there always have to be an evil antagonist? I had a doctor once who told me that "You come into my office with an arrow through your head, I don't ask how it got there, I remove the arrow."

Let's remove the arrow and worry about the blame later. But just for your information, I was China bashing here on these pages long before it was the current rage. See Uighur Tragedy, written on January 9, 2019. Or Peking Opera back in 2012. And I went after my precious Obama too, Sterile Cuckold, 2016. Remember Melamine? 2008. Poison Pens, 2011. Hu Jia, 2008. Xue Jingbo, 2011. There are of course, more things I have written but I won't belabor it. I'm not some anonymous troll asshole, I never hide and I share and report and I sign my name and I have done so ever since this blog was born.

Conservatives and liberals alike had no problem looking the other way on China when they were making lots of money there. But the Chinese behavior hasn't really changed much in the last seventy years, hasn't changed a bit. If you need to displace your anger by attacking the Chinese, have at it, but it is still not going to do any constructive good.

And in the words of Inspector Reynaud, "I'm shocked, shocked that there is gambling going on here." "Your winnings sir."
Posted by Blue Heron at 12:08 PM