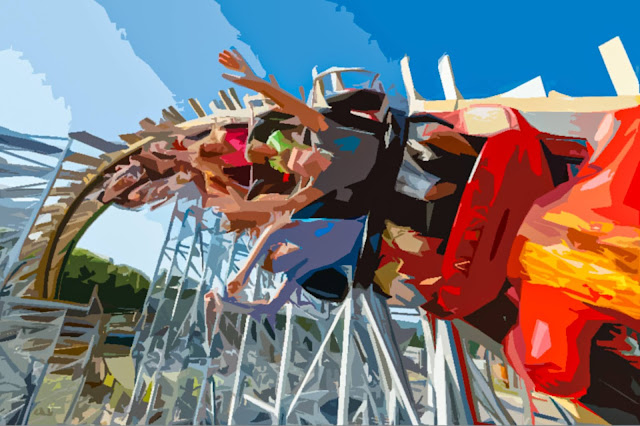 We are at that point in the roller coaster ride where the adventure is no longer fun for any of us. We just want it to be over before we hurl.

I was talking with a friend about another friend who is starting to crack a little bit. Well off, he is seeing his life's work get jeopardized and it is completely freaking him out.

People who had reasonable expectation of being totally protected found out there is no security for almost anyone when the world falls apart and the bottom falls out.

Who could blame him? The whole world is similarly affected, unless you were one of the lucky über wealthy few who scooted off to New Zealand at the first sign of trouble. But show me a normal person who isn't scared and they are either totally clueless or harbor much more faith than I currently possess.

The people I know that are handling it the best, seemingly? The street people I know, the poor people, the people who never had much anyway. Personally, life has been pretty edgy for me too for a while, this just carries on the continuum. So I am not so traumatized and neither are they. But I do want things to get back to normal. I am getting edgy too.

We went on a provision run to Temecula yesterday. There is a sign outside Costco that states that you must wear a mask to enter. We both had ours on, hot, clearly not comfortable, but we wore them. And so did everybody else and the place was very crowded, literally hundreds of people inside.

Except one tall guy, forties, who was nonchalantly shopping with no mask in sight. Fit, looked like a fireman. And I looked at this guy and couldn't stop myself. Asked him where he got off not wearing a mask and why he didn't think the rules applied to him? He said it was none of my business, no one stopped him walking in. And then he asked me if I was at risk? I replied that I in fact was and he then said "Well, you should not be out of your home."

I was close to punching the guy at this point. I didn't. My wife was horrified at my behavior, said it was not my job to be a mask cop. Said I attacked him. But the guy was wrong, there is a state order, the sign was clearly visible and he didn't care one bit.

I think this is a dangerous phase of the epidemic in which it is easy to get overconfident and screw up the protective measures. We will see a lot of people getting out simply because people are sick of it and because they have defensible civil liberties. I think there is particular danger for those with clear vulnerability to this particular virus as they will see others out and experience social pressure to loosen up. Until there is enough testing to realistically ascertain how big this is the danger level remains unknown. It I hairy out and I, for one, don't plan to be an example of anything to anyone.

Clearly a trumpianGOPer - they don't believe the rules (any rules) apply to them, want everyone (else) to die and don't care that anyone else feels otherwise.

I don't know if there's a name for this, but it's a pretty common personality defect I see lots of these days. Lots of folks just don't think the rules or social norms apply to them. I see it all the time on the freeway. It's maddening. And good for you for calling him out.

We are doing pretty well. The only thing I really miss is going to the grocery store. Mg is scared to have me leave the house because of my bounty of pre-existing conditions. He has asthma so he only is leaving the house for the pharmacy. I am actually seeing more of my friends and reconnecting with old friends using zoom. I think we should have a family zoom.