Lessons of the past

I have read and been sent some interesting articles regarding past pandemics. Rather than write something overarching, I think I will let them speak for themselves.

The first was about Oakland's  Jack London and a book of fiction he wrote in 1910, The Scarlet Plague.


...But London’s larger message was even more powerful and prescient: When pandemic strikes, don’t be distracted by saving your home or your work or even your economy. Prioritize safety, and saving as many humans—and as much human knowledge—as possible.


The radical poet Heinrich Heine wrote about the 1832 cholera epidemic in France. Emergence has a thoughtful piece on the lessons he took from the pandemic. And their enormous toll on humanity.


What is hysteria and what is prudence? What constitutes foolish swagger and what is necessary courage?

Daniel Defoe wrote A journal of the plague year in 1772, which is a story of the bubonic plague in London in 1665. Those that prepared and exercised suitable caution survived.


Nothing was more fatal to the inhabitants of this city than the supine negligence of the people themselves, who, during the long notice or warning they had of the visitation, made no provision for it by laying in store of provisions, or of other necessaries, by which they might have lived retired and within their own houses, as I have observed others did, and who were in a great measure preserved by that caution…

Samuel Clemons visited Europe in 1867 during the cholera epidemic. He wrote a book about his travels in Italy called The innocents abroad. He eventually contracted the disease, though not fatally. There was a decent piece about Twain's book recently in National Review, now unfortunately behind a paywall. But I did find a story on the subject from a Catholic's perspective. From Twain's pen:


When the cholera was raging in Naples; when the people were dying by hundreds and hundreds every day; when every concern for the public welfare was swallowed up in selfish private interest, and every citizen made the taking care of himself his sole object, these men banded themselves together and went about nursing the sick and burying the dead. Their noble efforts cost many of them their lives. They laid them down cheerfully, and well they might. Creeds mathematically precise, and hair-splitting niceties of doctrine, are absolutely necessary for the salvation of some kinds of souls, but surely the charity, the purity, the unselfishness that are in the hearts of men like these would save their souls though they were bankrupt in the true religion - which is ours. 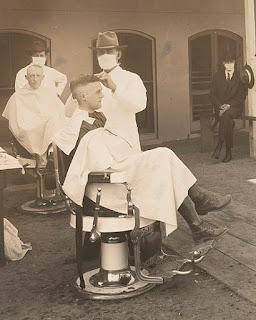 Great story on the Spanish Flu of 1918 and San Francisco at Business Insider. They unfortunately celebrated too soon and let their guard down and the results from the second wave were tragic and even deadlier.


Spanish-flu infections seemed to dwindle by November 1918, and the city relaxed lockdown orders. When another wave hit San Francisco, much of the public — including "The Anti-Mask League" — resisted the mandates that city leaders reenacted to help blunt the spread of the disease. The city ended up with nearly 45,000 cases and over 3,000 reported deaths.

I never knew there was an anti-masker movement until Dave told me the other day. An anti mask league was formed in 1919. From Wikipedia:

Although there were some complaints from citizens during the initial period of mask-wearing, the new ordinance in 1919 galvanized more serious opposition and the Anti-Mask League was formed.[1] Members of the league included physicians, citizens,[2] civil libertarians,[3] and at least one member of the Board of Supervisors.[1] An estimated 4,000–5,000 citizens attended the meeting on January 25.[4][5] Some members of the league wanted to collect signatures on a petition to end the mask requirement, while others wanted to initiate recall procedures for the city health officer. The debate was heated.[2] Some objections to the ordinance were based on questions of scientific data while others considered the requirement to infringe on civil liberties.[6]In addition to complaints from the Anti-Mask League, some health officers from other cities also contended that masks were not necessary.[2] The San Francisco city health officer criticized the secretary of the state's Board of Health for questioning the efficacy of masks, saying "The attitude of the state board is encouraging the Anti-Mask League."[7]


Do we ever learn or are we just destined to continually repeat the mistakes of the past?

We do learn, and some are telling us, but we don't pay attention is the thing.

Thanks, I'm afraid fat chance that most people in my city (San Francisco) will have learned from what happened here one hundred and two years ago. I can already see less people wearing masks than there were two weeks ago.

Wow thank you so much for letting me know about Emergence.

In the fresco "Triumph of Death" the horses head is very much like Picasso's horse head in the Guernica.

Great point, I never saw that on the fresco. You are right.

Gotta love it: The Anti-Mask League!
Yes, the more things change, the more they stay the same.

I love the Mark Twain paragraph about his sympathy for those selfless workers in Naples.
Twain always could/can be counted on to pen the most succinct and accurate jab to deflate ignorance, pomposity and zeal of the stupid variety.

Thanks for the posts!

Thanks Wilbur, I like the tongue in cheek allusion to the "true religion." There was a lot of anti catholic bias going around at the time and he was not above poking fun at himself.