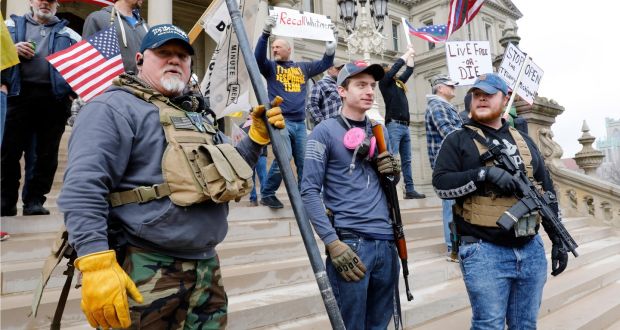 I took down a snarky post I wrote last night. A liberal friend says I was attacking people and not engaging with them or trying to educate them and change their minds. Fair enough. Mea Culpa. (That means I'm guilty.)

While certain minds are incapable of changing, because facts are hard to comprehend for some people, and obviously even for me at times, I want to look at this from another angle for a second.

For what purpose do people bring large weapons to political rallies, particularly rallies that have nothing to do with gun control? What unspoken message are they sending? Is there any reason for these armed protests except to scare and strike fear in people?

To me the message is; we are fearful but petulant babies and if we don't get our own way you are facing violence and possibly an armed insurrection. Am I reading this wrong? Am I off base here? It is the message of a typical bully. And such visuals do scare me, Ken, whether the weapons are truly automatic or not.

Do you ever hear of these people that are bringing the scary looking weaponry and calling for a "little blood to water the Liberty Tree" being called out on the right? No, because the President loves them and exhorts them to continue on a regular basis. It has unfortunately been a phenomenon since Charlottesville, when the violence came to a fever pitch and a young girl was killed by one of these people, ostensibly one of the bad nazis.

Can you imagine the hue and cry on the right if liberals started bringing guns to rallies? But it would never happen because we don't believe that right makes right and in the concept of terrorizing people in general. Except with quinoa and kale of course.

*
Whenever I write about right wing extremism I immediately hear back about Antifa and I have to admit that I don't know much about them. I believe that they go back to anti fascists from the Spanish Civil War but in the context of our country, think that they are a relatively recent phenomenon designed to protect people from Northwest skinheads and white supremacists. They show up at Nazi rallies and stick up for minorities, give the fascists a go.

But no Antifa member has ever killed anybody, as far as I know. I think that eco-terrorists have killed people or a person in the past and that is as equally abhorrent to me as the actions of a church, synagogue or abortion doctor shooter. I condemn them. Political violence in all forms is despicable. Not sure that the eco terrorists have a political inclination but will pretend that they do for the sake of argument. Yet as far as I know, Antifa is about bloody noses, not death. Their charter is supposed to be self defense. Four Antifa members have apparently been killed but they don't themselves kill people.

Now I don't know much about them and don't have time to research this morning and if I have the facts wrong, please let me know. But let's get some perspective. Look at the death count from right wing extremism in this country and around the world.

Jim sent over the Johnston terrorism archive. With the exception of the deranged guy responsible for the Scalise shooting, left wing violence of any kind or that results in fatalities is actually extremely rare in the last fifty or so years.

While beating up people at political rallies is not a wise thing to do or something I either approve of or countenance, I don't think you can equate a group that has a record of killing zero people with jackbooted right wing terror that actually kills over a hundred people in the United States in a calendar year. El Paso, Poway, Pittsburgh, etc.

That is called a false equivalence. If you have never heard the phrase I encourage you to look it up. Write me a private email and I will break it down for you. Our goal here is to educate.

So please stop with the antifa, antifa, antifa stuff. They are not in the same league. Or am I missing something here? I promise to do some more research, keep an open mind and even listen.  Because I like to think that my mind can be changed.

I think that the emergence of protest and the politicization of the epidemic is pretty much par for the course. All major crises are clusterfu***. It would be cool if we had a national leader who could grow into the crisis and lead the whole nation instead of splitting people, but this splitting is an inherent part of Trumps personality, so we should probably not get all flipped out by it. Getting flipped out just feeds the splitting anyhow. There might not be a lot to do except trying to ge the science based information out there to hopefully counter the BS a little bit AND making plans for personal survival. States can only get away with using public health police powers for a temporary period of time--eventually the lockdown becomes unsustainable. Three weeks from now states that opened up too early are quite likely to experience the consequences.
This country has a history of rising above major crises through civic engagement and while I hope this can happen again I am a bit pessimistic. A crisis like this can ennoble a country but it could also, in our case, turn into a free for all of resentment and anger accelerating out decline and hastening our arrival as the world leader of banana republics.
Chiquita anyone?

Scared people with weapons scare me.

A few thoughts: Antifa is all about violent protest. Choosing a name that indicates opposition to another violent group does not change that. Their presence at an event is intended as a threat. Nazis would still be Nazis if they called themselves anti-Bolsheviks. Trying to rank them by the level of bloodshed, while understandable, misses the point that their willingness to use and threaten violence should delegitimize them as an ally. As a supporter of the entire constitution, I don't believe that brandishing weapons is part of any protected form of protest. Any weapon. It should be illegal and should be enforced. Once you bring a weapon, you are not a protestor but a terrorist. In the truest sense of the word. I do not think that the labels of right and left serve any purpose in truth-seeking political discourse. Nor do liberal and conservative. Like all generalizations, they are always wrong. So let's discuss issues like the purpose and appropriate level of taxation. Or the best way to regulate immigration. Or the role that race-based policies and prejudice play in it society. Let's find the best solutions and work together to implement them. While I understand the desire to discuss false equivalency, I don't see how it moves us forward. It is typically a symptom of a failed conversation to exchange equivalencies, false or otherwise.

Robert
You always think you know enough about a particular subject to truly believe you are right but, never enough about the same subject to know when you are wrong. When one debate to win, that is one thing but, when one debates to learn, that is all together something special. Do you really believe your blog outlet serves the greater good of society?
We are bombarded by negative ads, campaigns, investigations, murder, virus 24/7. It is unrelenting and toxic. I want to support positive, constructive bloggers that have compassions and understanding to opposing points of view. Over saturated negative blogging is beneath you. We are hungry for something to help us deal with life because, let’s face it, some of us carry enough shit already.
Love ya Bro!
Peaches

aferda,who is calling antifa an ally? I specifically condemned all acts of political violence, from any quarter. I just think it is a canard when you look at their actual record, to equate them with nazi skinhead killers and the like.

Peaches, I usually try to be a pollyanna as you suggest. In critical times, the gloves tend to come off, please forgive me for this but I am after all, a human.

I try to call things as fairly as I can. The focus on antifa by some is a sleight of hand. Take a look at the hate map and see where the numbers lie:

that was a great column about the terrorists with guns. no one can ever be sure, but i think if the antifa had not shown up at some occasions, the jerkboot terrorist supporters that donald chump called 'fine people' might have caused damage and harm, like they did at charlottesville.

The white house seems to be trying to get my governor assasinated.

TRIGGERED: 20 times leftists went berserk on campus in 2019 https://www.youtube.com/watch?v=_J0aye5nkKE
The Real Reasons Why the Left Are So Hysterical Over Guns http://strike-the-root.com/real-reasons-why-left-are-so-hysterical-over-guns

The 2d is a guarantee of a right of rebellion, of the right of an armed group of the people to intervene in the governance of this country by force. Like so much else in the Constitution, the right of rebellion made it into the document as a compromise, and Art. 4, sec 4 clarifies that state govts get to distinguish between armed groups that are engaged in insurrection and treason against the US and the state govt, and those that have state sanction in using organized violence, or the threat of such, to change govt policy. Until and unless their state declares such an armed group of protesters to be insurrectionists, these folks who bring guns to political rallies are indeed exercising their 2d Amendment rights. You may have your right to vote, but they have their right to revolt against the folks you vote into office, as long as their actions don't attract the condemnation of their state legislature.

Non-responsive Ed, my crooks and liars troll. I specifically talked about fatalities, why don't you answer the basic question? Why bring guns to political rallies?

"A liberal friend says I was attacking people and not engaging with them or trying to educate them and change their minds. Fair enough. Mea Culpa."

Sorry, but there is absolutely no way to engage with these people or change their minds. They are lost forever in the fog of hatred and greed that the Republican party has generated. Need proof of this? The abominable performance of Trump in handling the pandemic has not reduced his popularity one percent. It is at the same 43% that it has been for his whole Presidency.