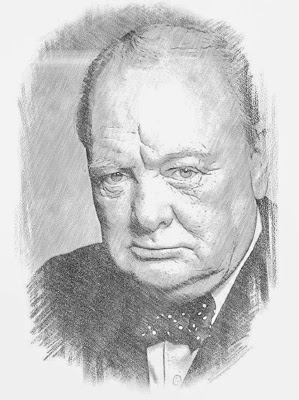 We Americans are sort of running around with our heads cut off with this covid 19 thing. Open it up, close it down, it's a hoax, it's the end of life as we know it. Reactions run the entire gamut. Many of us are freaked out.

The truth is that we are all at a loss here, we are all guessing as to the exact nature of the beast. Nobody knows. Except that we do know it is very serious indeed with now close to a quarter million people already dead globally.

What I also know is that we humans have had it pretty easy for a long time and don't really handle pressure very well.

I was thinking of a corollary in the last hundred years this morning and all I could think of was the blitz.

On September the 7th of 1940, the German Luftwaffe started bombing the United Kingdom. London was bombed for 56 straight days and nights. Blitz is the German word for lightning.

Over 40,000 civilians were killed, 139,000 people wounded and a million houses destroyed in the indiscriminate and constant bombing raids. Can you imagine how terrifying that was?

Nearly a thousand German planes took part in Unternehmen Loge or Operation London and the impact and devastation from the campaign was relentless. Here is an interesting eye witness account by the war correspondent Ernie Pyle.


Below us the Thames grew lighter, and all around below were the shadows - the dark shadows of buildings and bridges that formed the base of this dreadful masterpiece.
Later on I borrowed a tin hat and went out among the fires. That was exciting too; but the thing I shall always remember above all the other things in my life is the monstrous loveliness of that one single view of London on a holiday night - London stabbed with great fires, shaken by explosions, its dark regions along the Thames sparkling with the pin points of white-hot bombs, all of it roofed over with a ceiling of pink that held bursting shells, balloons, flares and the grind of vicious engines. And in yourself the excitement and anticipation and wonder in your soul that this could be happening at all.
These things all went together to make the most hateful, most beautiful single scene I have ever known."

The bombing continued for nine months, the axis bombers dropping over 41,000 tons of bombs. But the attitude of the British was famous for its resolve and tenacity. Rather than be cowed, they went along with their lives with pluck.


Based in part on the experience of German bombing in the First World War, politicians feared mass psychological trauma from aerial attack and the collapse of civil society. In 1938, a committee of psychiatrists predicted three times as many mental as physical casualties from aerial bombing, implying three to four million psychiatric patients. Winston Churchill told Parliament in 1934, "We must expect that, under the pressure of continuous attack upon London, at least three or four million people would be driven out into the open country around the metropolis." Panic during the Munich crisis, such as the migration by 150,000 people to Wales, contributed to fear of social chaos.

Guess what? It never happened. People kept their heads together. I loved this snippet that I read:


Although the intensity of the bombing was not as great as pre-war expectations so an equal comparison is impossible, no psychiatric crisis occurred because of the Blitz even during the period of greatest bombing of September 1940. An American witness wrote "By every test and measure I am able to apply, these people are staunch to the bone and won't quit ... the British are stronger and in a better position than they were at its beginning". People referred to raids as if they were weather, stating that a day was "very blitzy."

According to Anna Freud and Edward Glover, London civilians surprisingly did not suffer from widespread shell shock, unlike the soldiers in the Dunkirk evacuation. The psychoanalysts were correct, and the special network of psychiatric clinics opened to receive mental casualties of the attacks closed due to lack of need. Although the stress of the war resulted in many anxiety attacks, eating disorders, fatigue, weeping, miscarriages, and other physical and mental ailments, society did not collapse. The number of suicides and drunkenness declined, and London recorded only about two cases of "bomb neurosis" per week in the first three months of bombing. Many civilians found that the best way to retain mental stability was to be with family, and after the first few weeks of bombing, avoidance of the evacuation programmes grew.
The cheerful crowds visiting bomb sites were so large they interfered with rescue work, pub visits increased in number (beer was never rationed), and 13,000 attended cricket at Lord's. People left shelters when told instead of refusing to leave, although many housewives reportedly enjoyed the break from housework. Some people even told government surveyors that they enjoyed air raids if they occurred occasionally, perhaps once a week.

So let's learn from the brits, keep a stiff upper lip and pull ourselves together chums. We will beat this bastard.

I think this should be submitted to The New York Times.
At least Facebook. I know how to do that. Would you mind if I shared it on Facebook? Of course, citing your name as credit and date.

Thank you so much Kat. Please do.

Indeed an inspiring look at our situation. Thanks for the good writing. No bombs, we are lucky. The next election will tell the tale, will we live on in peace, or have to battle on...