My immunotherapy session was very difficult this week. Much different than the previous. I have been in a lot of pain and discomfort since Friday. Thankfully this is the last one for a while. We will take another look around my innards in early June.

I do miss my fraternizations with friends. Text message groups and other electronic communications are not the same as touch and physical proximity. Although our immediate circle has become much smaller in the past year, Lena and Ron, Renee and Vern, Don, Bob and Lois, the coffee shop and our own stores pretty much. Leslie has a Mah Jong group and some other casual groups she hangs out with. That is mostly it. 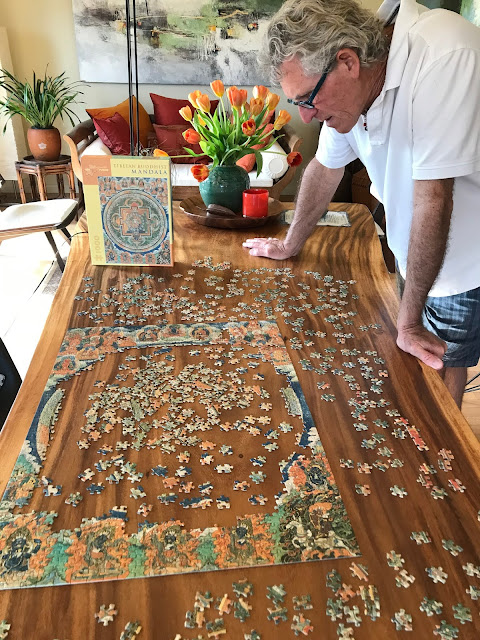 Lena and Ron are doing well during the quarantine, baking blueberry muffins and working on a large puzzle. 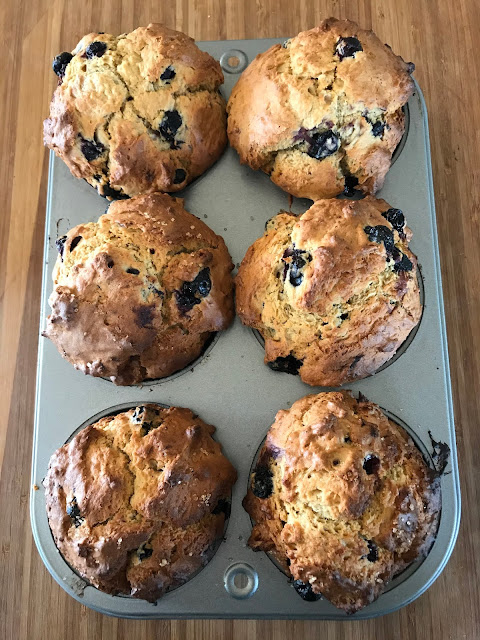 Leslie has been baking too, a rarity in my house. I think people all over the world are baking right now! 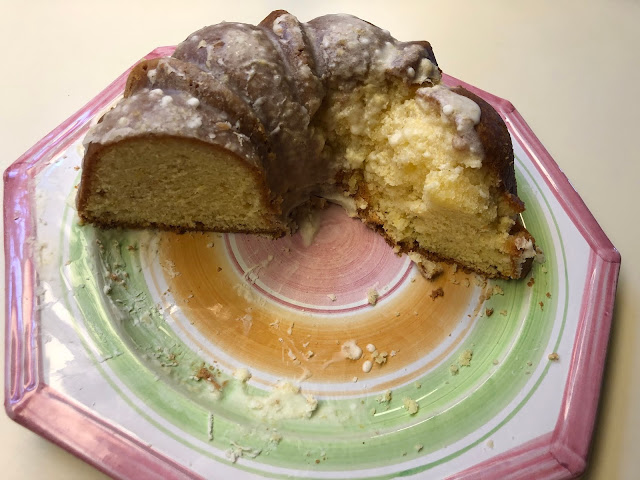 A half eaten confection from Renee. Looks great! 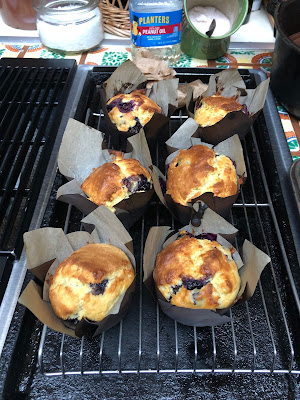 And blueberry scones. She is a great baker and a great cook. Her clofutti is beyond compare. 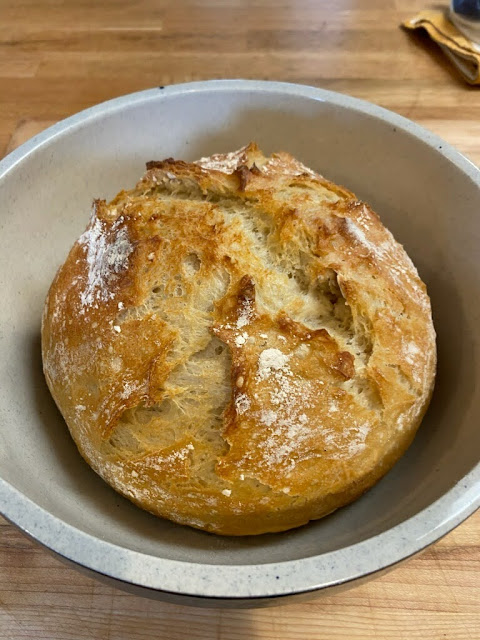 Looks like Patricio made some beautiful bread too. I can smell that wonderful sourdough loaf from here.

At the Sommers house, the banana bread is now officially history toast but still working on the organic cookie brownie hybrid.

Leslie mixed up two different batters and marbleized it. No pictures. Delicious treat. 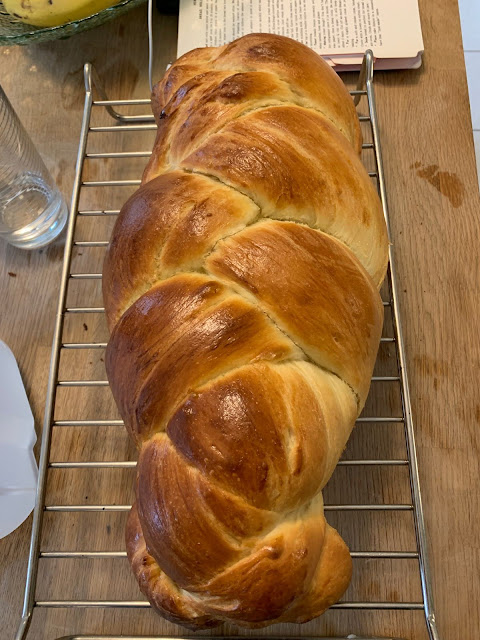 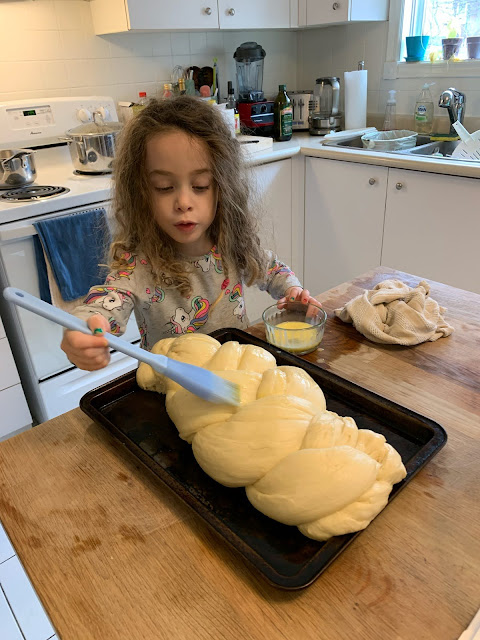 My niece Rachel and her daughters Roslyn and Matilda made Challah this weekend up in Toronto.

We are not doing much else besides eating, reading and processing bad news.

Not recreating classic paintings or anything like that but I love the work of the people that are.

What have you been doing to pass the time? 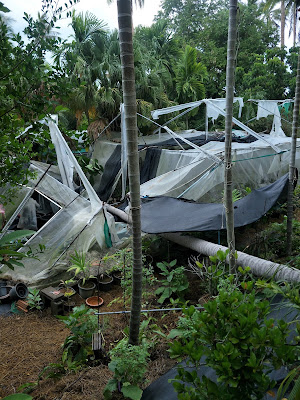 Shawn in Thailand had a big rain. A cocos palm flattened one of his greenhouses and the thatched roof of his home is leaking.

Speaking of Shawn, he sent me a neat video, light lizard.

Jonathan sent a collection of wildlife photo fails, some of which I rather like. 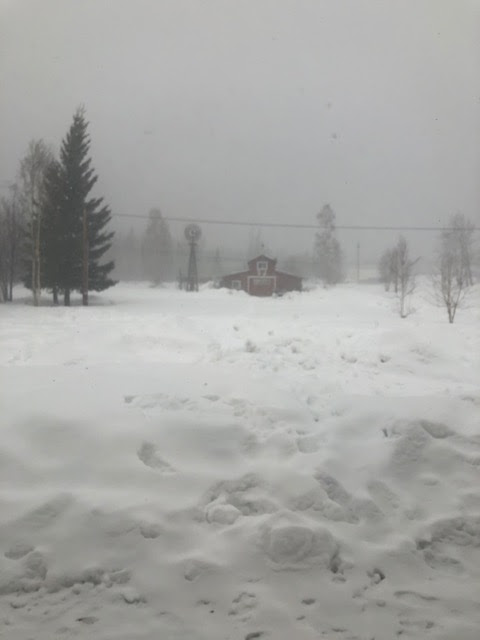 Gena and Jeff are snuggled up in what looks like very cold Alaska. 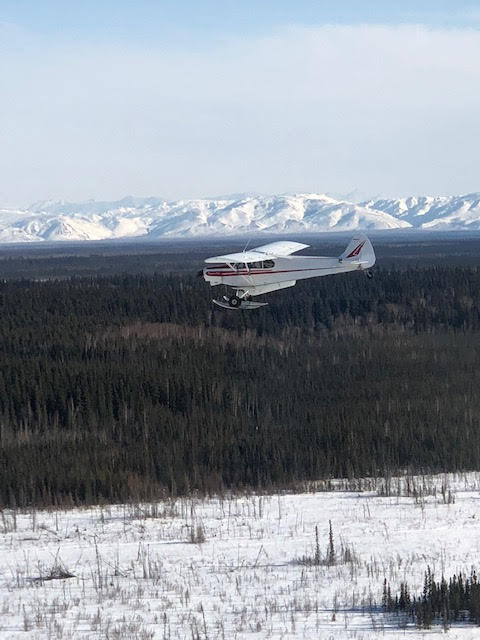 Joseph and Linda's hydroponic herb tower cranking out the goodness. 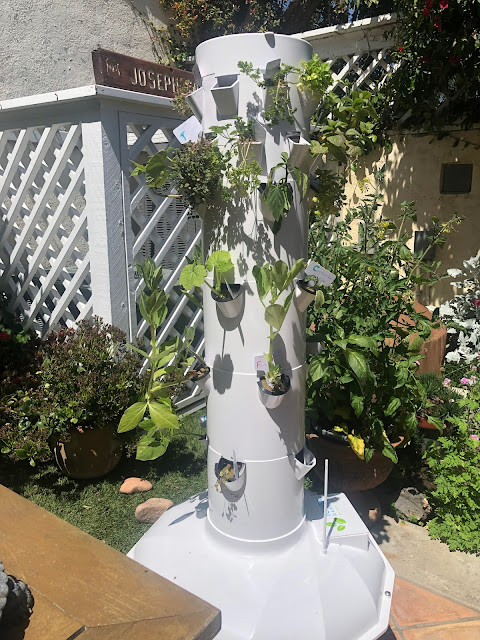 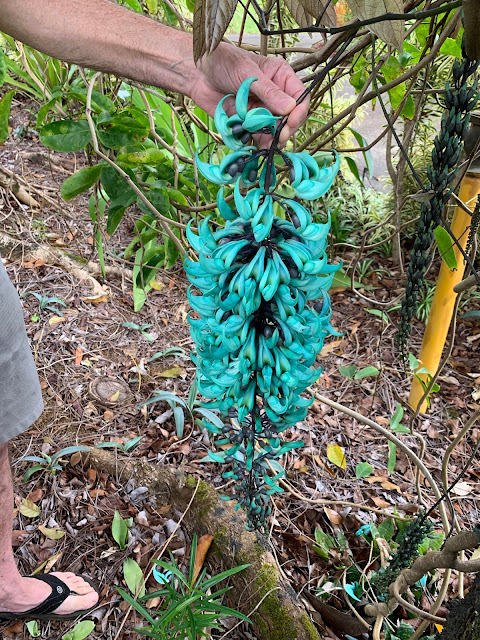 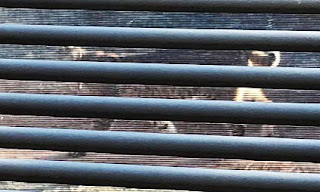 Millard forwards a JB video. He also says that there was a big bobcat outside his Santa Fe window the other day, with the funky picture he sent I said it looked a little more like the neighbor's house cat in jail. I have never taken a shot of a bobcat, hope I get the chance one day. Good job, John. 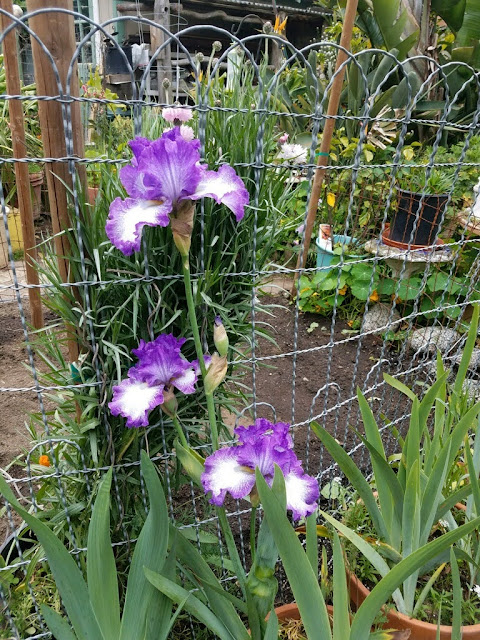 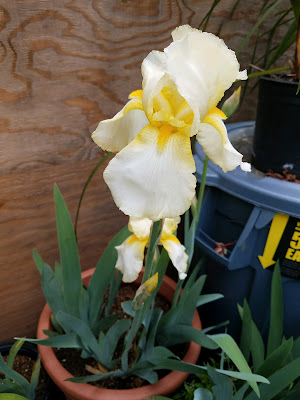 Warmboe just sent over several gorgeous pictures of his iris and roses in Burlingame. 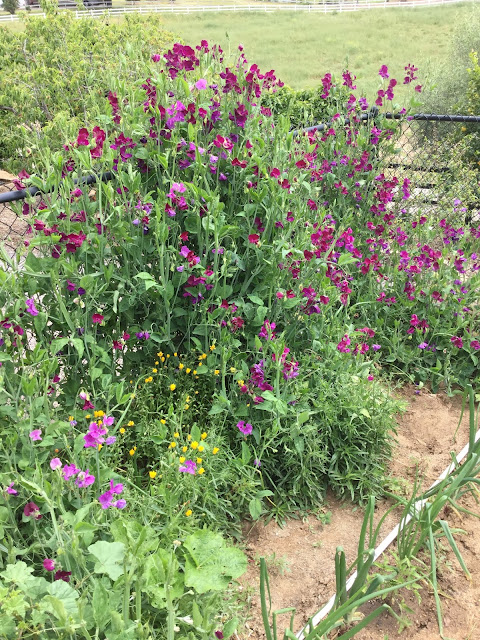 Lois and Bob send pics of their sweet peas, growing out of control, can't pick them fast enough. 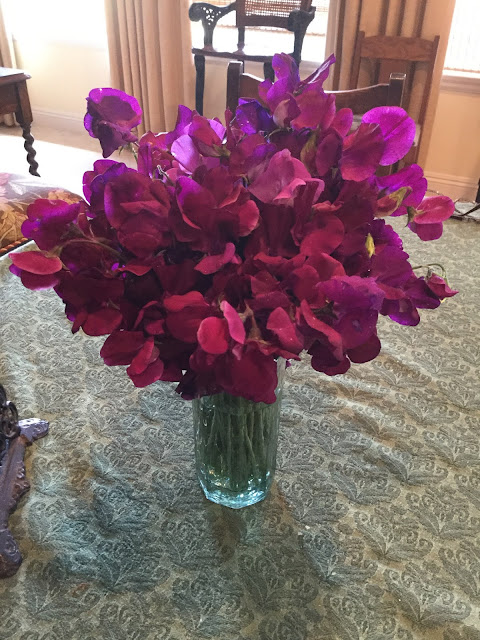 Plaa at her and Ricardo's new home, currently under construction in Thailand. 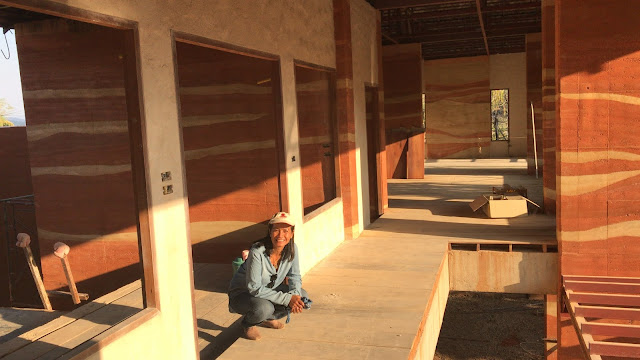 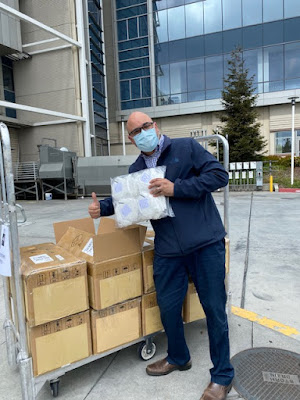 That is so awesome. He gets a bunch of photos for that incredible act. Here he is with one of his dogs, Butch. 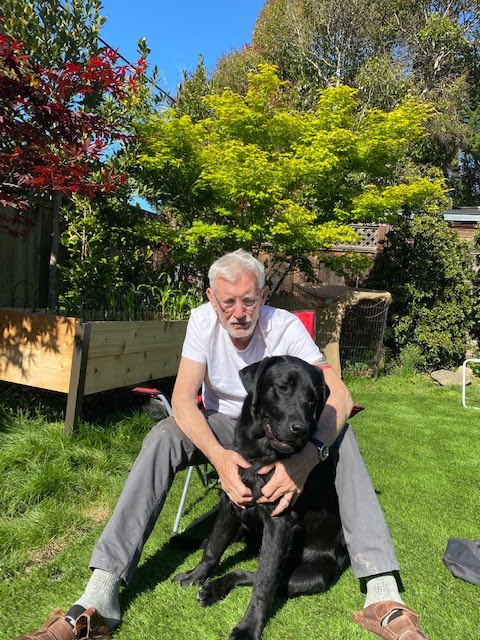 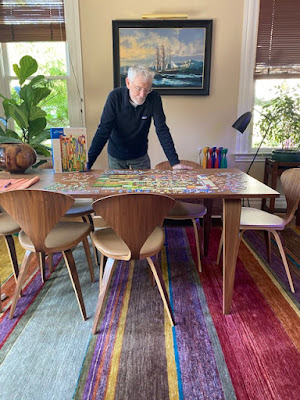 Playing on his 1910 Brunswick. He was a serious shark in the day. 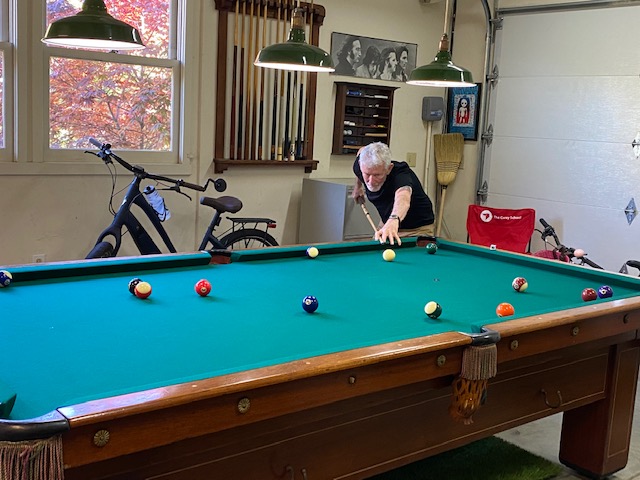 And his wife, daughter and grandson on the trampoline. 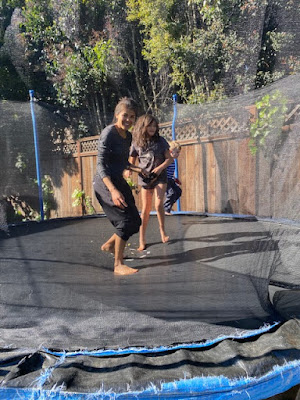 And another picture of Oa with Scout.

I love Michael and I love the rest of you too.


*
If you use Google Chrome, there is a bug, you better update now if you do not normally do so automatically.

All for now. Please send more pictures.
Posted by Blue Heron at 10:00 AM

Just walked the old golf course at San Luis Rey Downs with my ex-wife, 6 feet apart, and in masks. Place was crowded, nobody wore masks, and there were large groups of people who couldn’t be immediate family. I guess I’m doing this wrong…

Panting outside of my house... between rain storms. Processing photos I have previously overlooked. Reading. Reading texts from some crazy amigos!

Whatever will fit in the microwave

Salads and lots of spaghetti, keeping all the balls in the air doesn’t give us any more time to cook, just less options I’m afraid. Trying to get take out from our favorite restaurants a couple of times a week to help keep them a float. Two favorites Kung Foo Noodle and El Charro...
Hope your finding a way through, tough times for so many small business especially for those that have health challenges.
Best,
Mark

I am not baking and I am probably the only one in the world not doing so. We are, however, waiting to sow the seeds we planted; squash, celery, fava beans, tomatoes, parsley, cilantro, oregano, and a couple more I cannot remember . Meanwhile I have made, all from scratch with zero cheating, mole negro Oaxaqueno, thai coconut curry fish soup, carnitas with all the fixin's. This week will be chicken tomatillo and good fashioned old steak poivre. We are suffering for those in need and are completely grateful every day for what we do have.

I don't bake. I made all the family bread when I lived in the commune,but mg doesn't like sourdough or whole grains. If he wants to eat shit,we will buy it.

I am knitting and spinning up a storm. Beginning to read a lot again.

Have you talked to John in a while? I tried but he is depressed and didn't say much.


I ordered America’s Test Kitchen Twentieth Anniversary TV Show Cookbook . Whatever page I open it up to is the recipe I make if I have the ingredients. Just made their Provençal Vegetable Soup (Soupe au Pistou) . . . Delicious. I have two great easy biscuit recipes I’m making daily. Biscuits make me happy ! Be well friends, Jerri