All the young dudes, carry the news, boogaloo dudes

It has been an interesting couple of days. Leslie and I went to PCC on Sunday, bought a few cool things including a very early painting by Ralph Love that was given as a Christmas present in 1942. Afterwards we went to the John Moran Auction in Monrovia and sat around for the auction of Stuart and Cindy Hodosh's Mexican silver collection.

Contrary to the popular wisdom that the Mexican silver market is dead, the prices went through the roof. Certainly nothing that we could afford. I guess that it is a good thing.

I had bought lox at Costco and needed bagels. I googled local bagels and came up with Goldstein's in Arcadia. Warning, don't ever go there. Tasteless and saltless rocks. 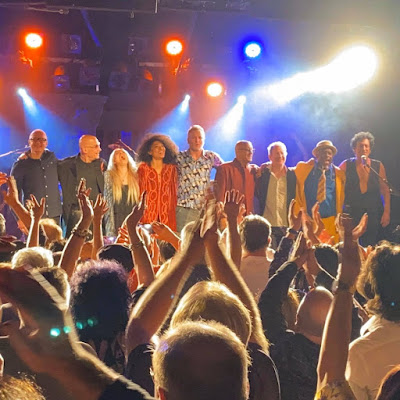 Tuesday we went to the opening show in America for the Bowie Celebration tour. Belly Up Tavern in Solana beach. Notice a familiar purple hair color lower left?

It was an absolutely incredible show. Three different vocalists took up the challenge of singing Bowie's leads including Corey Glover from Living Colour, Sass Jordan and Joe Sumner.

They did their best but I felt the absence of the late musician in his songs very strongly. But guest vocalist Judith Hill absolutely killed it. Oh my god!

Rest of the band was Kevin Armstrong and Gerry Leonard, guitar, Carmine Rojas, bass, the phenomenal Mike Garson on keyboards and Alan Childs on drums, who played on the Glass Spider tour, which incidentally was the last time I saw Bowie live.

The band played the entirety of Diamond Dogs and Ziggy Stardust with a few other things mixed in. End of the set was Jean Genie, Young Americans, Life on Mars and All the Young Dudes.

As the band left the stage I yelled out for Aladdin Sane.

Gerry Leonard, a Bowie guitarist and sometime music director, played Andy Warhol and Loving the alien solo after the break. Perhaps they had heard me, Bowie pianist extraordinaire Mike Garson then launched into the eponymous Aladdin Sane after explaining their going into the studio to record it with Beatles producer Ken Scott in 1973 and what an incredible experience that was.

It was beyond fabulous, in fact it brought a tear to my eye. Emotive and poignant with snippets of Imagine and other songs thrown in for good measure. Brilliance tip toeing on the edge of insanity. The most powerful piano I have ever heard in my life, beyond even Hornsby. Definite high point of a stellar show.

I was in the back mostly, eschewing crowds and resting my back. Leslie as is her wont, was up close and personal. Later she told me that she also cried on several occasions, one being the performance of his song Lazarus, his last single, written during his fatal illness.

Encore was Under Pressure and then Heroes. Crowd was pumped, some interesting glam outfits in appearance. Leslie managed to score a ticket for Friday's show yesterday. If you love (and miss) Bowie you should try to see this show somewhere on the tour.
Posted by Blue Heron at 11:39 AM