One flew over East Elder

I have heard about two more recent incidents in Fallbrook yesterday where unhinged people were harassing and threatening shopkeepers. One of the merchants told me her story yesterday, a nasty young man pointed a pencil towards her face the other day and told her to step outside the shop so that he could beat her up. It scared the hell out of her. I told her to call the police next time and to call me anytime she is scared and if the cops don't come I will come over and try to take care of the problem.

I mentioned this to a person who is rather pro homeless shelter yesterday and discussed the failure of the police to respond to similar recent incidents and rather than show much empathy and concern for the victims of recent harassment, I was quickly dismissed. It was the victims' fault for not calling the right emergency number.

We have a problem in town and it is getting worse and about to get much worse. And I have to wonder, why it is suddenly hitting critical mass? 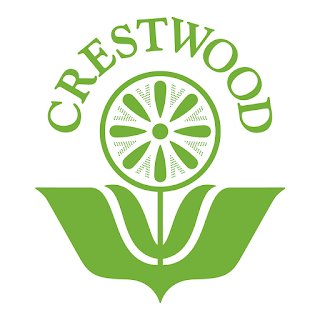 So I started asking around. I have heard unsubstantiated rumors of late that it is possible that patients at the Crestwood Behavioral Health Center, located in the once proud building known as Fallbrook Hospital, have escaped the facility on occasion and roamed the town.

Now, that couldn't be true, we were assured at its inception that the facility was ably staffed, posed no danger to Fallbrook and was locked down as tight as a drum.

But I had to wonder, could these whacked out miscreants who have been creating problems of late be somehow connected to Crestwood? Unfortunately I still don't have that answer.

My interest was piqued however and I started asking around. If there was an escapee, would we in town be notified? Or would only the sheriff be notified? Would the sheriff tell us if he or she knew? Is there a written or unwritten protocol or alert system in place in case people do leave the facility without permission?  Nobody knows. Personally, I think that the people of Fallbrook deserve an answer to these questions and should not be left in the dark.

I did a little extra curricular research this morning and found an anonymous person who works inside the facility who was willing to spill.

Yes, according to this source, people have broken out of the building, repeatedly. Apparently there are seventeen separate exits and the Fire Marshall will not let some of them be sealed or fixed for reasons of safety. The escapes have been mostly promulgated by either a single individual or a small number of individuals. I don't know about their mental state or capacity to harm others. Morale among staff is very low and they are getting a lot of turnover, apparently. Doesn't sound like an ideal situation for Fallbrook.

Now it is irresponsible to conflate our nascent homeless population with the mental health population. But the question does beg to be asked, who exactly are we dealing with on our streets, when patients have the ability to find their way outside? Does this private facility have any responsibility or accountability to our community? Online evaluation statements by Crestwood employees are not exactly glowing. 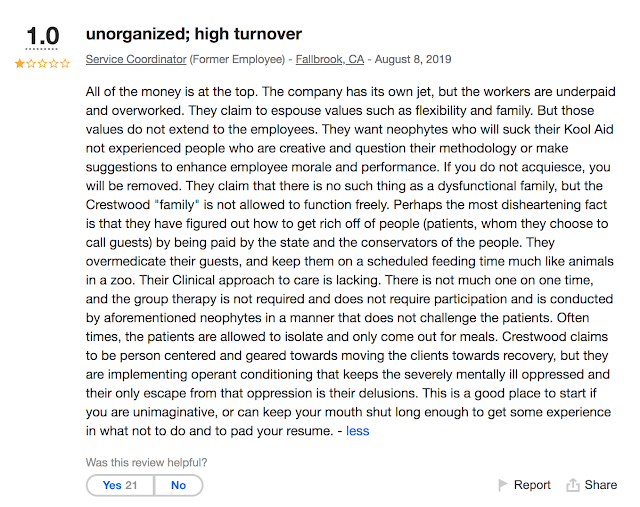 So there are a lot of questions raised. Who is getting out, if anyone, how often has it happened, how long were they at large, are they a danger to the community and why aren't we the citizenry finding out about it? And exactly what kind of supervision is in place for these patients and is it effective? What exactly is going on up on East Elder?
Posted by Blue Heron at 4:39 PM

What is happening with the Fallbrook McDonalds occupation? it was news for a few seconds last month, then buried.

It could be but Sounds like beginning of San Fran south. I hope not cause to me this area is last stand of what the oc once was

Hi Robert
I was a case manager at our local Crestwood for about 3 years. I quit about 6 years ago. I was part time employee and I pretty much ran the place on the weekends. If I told you all that went down it really would burn off both of your ears.
bv

You'll have to tell me how that deal went down one day, bv.

We need some good local investigative reporting. What chance is there of that? Anyone? ~ Diane O

Homelessness issues are extremely difficult to deal with since you have a mix of unfortunate people, folks who just don't like rules, people with severe mental illness, rampant drugs and alcohol, etc. etc. Hardline approaches either fail or get stopped in court. Bleeding heart approaches usually just get taken advantage of. It takes a type of "tough love" and a lot of resources to make a small dent in the problem. Joe citizen gets confronted on the street by scary people and just wants the problem "gone". It won't go away quickly because it is a huge problem that is close to impossible to mitigate. It has been all over the bigger urban areas and now has increased in Fallbrook. Now we get to play "hot potato" with the rest of the county. Remember "wack a mole"?

I was reading an article on the homeless issue re: the Pico Promenade and a homeless guy said that he felt much safer there than he did in Vista, where he left two weeks ago. That is the problem for me. The word is out that Fallbrook is the spot to chill and it will operate as a magnet for more and more to come. There are people with different agendas in operation here, some of those those that receive grant money from the supervisors don't want to upset the apple cart and could care less what happens to our town.

Several months ago I heard from a former employee that conditions there were/are not good. She stated that in addition to the escaping, there is violence, sex in the hallways, breaking of large windows and the guests are allowed out on day passes. In addition, it was less then desirable working conditions. She quit due to not feeling safe among other reasons. Lately I have questioned the large amount of folks we see wandering the streets of Fallbrook and have wondered if perhaps these folks are from Crestwood and either escaping or being let out on day passes.To be clear, the people we are seeing clearly have issues. Thank you Robert for you writing and reporting skills. I truly believe Fallbrook needs answers to these questions as it is my understanding that this was not how Crestwood was represented to our community.