We should have a lovely full moon the next couple days. It will be officially full at 1:49 p.m. tomorrow p.s.t..

Many cultures had names for this particular full moon, the Crow Moon, Sugar Moon, Worm Moon, Lenten Moon and Crust Moon to name a few. You can look them up if you care to understand the references. The full sap moon is a native term for when the sap from the sugar maples is starting to flow.

The March full moon figured in Buddhist, Muslim, Hindu and Jewish cultures historically as well. Basically it had the same significance in most all of them, marking the last full moon before spring and signaling the seasonal changes in its advent.

This full moon will also be a supermoon. That is the description for any moon that is within 90% of perigee, its closest proximity to earth in its orbit. Which means it is going to look really big.

Sundown tomorrow is the start of the Purim holiday, the day celebrating the Jews deliverance from their Iraqi captors as told in the book of Esther. The Jews used a lunar calendar and we are in the middle of the month of Adar. In the Islamic calendar we are in the month of Rajab and fighting is prohibited. In Buddhism tomorrow marks the day where the Buddha first returned to his family after achieving enlightenment. It is called Medin Poya. The day also marks the start of the Holi festival in India.

I am going to try to remember to bring my camera home tomorrow and snag a few shots of the moon, weather permitting.

*
I took a nice walk today. Wanted to loosen my back up, which has been tight. Meant to cut some weeds but just don't feel good enough and thought a hike in the oaks would be a better ticket. Neighbors aren't screaming about my yard yet, it will wait.

At one point during my hike I was tentative. My balance has been bad since my anesthesia, something I have noticed with prior operations. I have been bumping into things of late.

The river trail crosses Rainbow Creek at a particularly idyllic spot. You have to tiptoe across a few rocks, some not too firmly planted. I made it without getting wet, a good sign. Saw some lovely birds, got lost in their song. Saw a swift or swallows nest that was very enchanting.

I drove back from the mailboxes and saw the hawk in her nest and thought what a wonderfully timed symphony nature presents, the sycamore sprouts leaves at the exact proper time to give our raptors some cover when nesting. Intelligent design indeed.

I left my house yesterday morning thinking it would be a particularly fine day. You see I had a great blue heron on the top of my redwood and I don't recall seeing that happen before. Its flight led me out of the valley, beckoning back once and then forging our trail.

The day didn't go off so well. I was talking to an older fellow outside my shop about his cancer when I brushed a small spider off him, one with yellow stripes on its belly. A moment earlier I had felt a momentary pain and I guess he bit me first. The spider, not the man, I smushed him. But the pain on my forearm is still pretty strong, not brown recluse strong, but not fun. 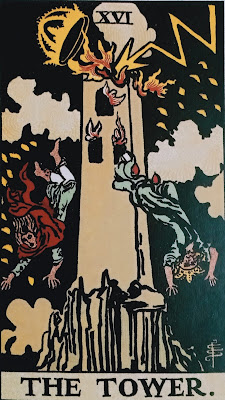 Had two or three people that were supposed to show up and maybe buy something not show up so the day was sort of a waste. And my basketball team tanked to boot. I asked the online tarot site for a single card to explain the current vibe and I got this one. The Tower.

A frantic time, freaked out people jumping out of buildings. Sounds about right. Koyaanisqatsi, the hopi term for life disintegrating and being out of balance.

As I walked today I saw a large rock sticking up out of the river with a perfectly chamfered side. And for a second I wondered if it could have traveled down the river from the Wolf Valley, near the headwaters of the river. In 1883, the blue granite of neighboring Rainbow was known as being the finest granite in the country.

Its quarries created many of the slabs that were used on Mission and Market Streets in San Francisco.  Could this large angled rock have come down the river from the quarry?

And then I thought about something the writer and lyricist Robert Hunter said that always stuck with me. Coincidences have to happen in a big old, random, infinite universe. What would be truly strange if if things never lined up. Cherries or lemons. As Sigmund Freud might have said one day,"Sometimes a strange looking rock is just a strange looking rock."

Here's hoping that the new moon clears away the earthly cobwebs and gives the whole damn terra firma a swift kick in the pants and a one way ticket out of our current retrograde motion and slow roll. Read this from Pakistan today, it is happening everywhere, o-pressers dey trying to keep us down... but as sure as the sun will shine, well, you know the rest. Everyone will get their share of what's theirs. Send the assholes on their way. Vanquish the pesky viruses. Save the planet.

Hey Robert, How do I keep your blue heron from eating the fish in my pond? He/she got all the fancy goldfish last week. Great meal for the bird.

we've tried to train her...