Do this, don't do that, can't you see the sign? 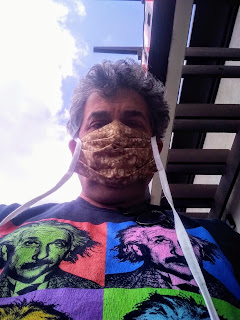 As I have previously mentioned, the amount of people at the top of our road out hiking has been staggering. For the most part they have been well behaved and decent enough but there are always some people. Found trash, condoms.

I think many of these people don't realize that residents actually live near their playground. Some of them drive cluelessly on the road down to the river, a narrow two lane affair, not easy in the best of circumstances. We have had to dodge several of them, on our side of the yellow stripes, mostly young and on their phones. It gets very dangerous.

The day before yesterday the narrow road was blocked by a large white truck. I couldn't get through. The occupant, a young tall kid, was jawing with my neighbor. Later I was told that he had been driving recklessly up and down the road at top speed and had got himself stuck. She was giving him hell when I drove up but I really didn't know what was transpiring. He told her it was a public river and he would do whatever he wanted. It's not.

When he left, he tore out past me and sprayed rocks all over my car. With a smile. Like a total a-hole. I had nothing to do with their conversation, learned later he had been speeding up and down the road like hell with his little blond girlfriend. Hope that I run into him again.

So it was cool today to see the sign at the head of the trail. Trail closed. 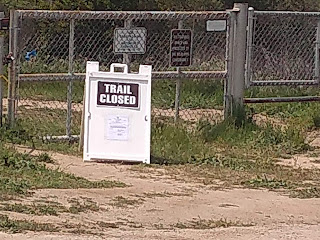 There was a no parking sign parked on the Wildlands Conservancy property too. When I came back there were three cars parked there. Right in front of the sign.

Because people feel entitled.  And act so irresponsibly. Now if we could only close the road too.
Posted by Blue Heron at 1:35 PM

Shutting down the Santa Margarita is not cool. It is now run by a private non profit that may not recognize how important that area is to the people of Fallbrook. I was recently told that the North side trails will be closed to mountain bikes because "horses and bikes don't mix". This is not true, bikes and horses have the same goal of riding in nature responsibly. If we don't honor our shared need then friction will begin. What we need is posted signage with a call in number to immediately report irresponsible people using the area. It can be policed by responsible users with the cooperation of the people running the Wildlands Conservancy.

Our lives have been certainly made more miserable by the recent influx. I don't mind giving it a break for a while. SMER is having problems too. There are way too many irresponsible people out there and most people don't want to play cop. The resident are paying the price. And I have lived on the river and one valley over for forty years. I have never seen anything like what I am seeing now. Guy in the middle of the road talking to his buddy yesterday, would not move and let me through, shot me the stink eye, people think it is their private park.

I will tell you that no steward has taken better care of the river than these folks. When trash is dumped, like it was two weeks ago, they had it out the next day. We would wait a month for FPUD. I really appreciate their attitude and commitment to the resource.

OK. You pushed one of my buttons, as you are wont to do. Why did you choose to note the presumed girlfriend's hair color (and by implication her race or ethnicity)? It seems that it was not relevant to the story unless it was your intention to prejudice the reader. Those blond people... Our dear leader is a practitioner par excellence of this: "Illegal mexican immigrant shoots young blond woman in San Francisco".

I believe that responsible writers (like you) should avoid any reference to a person's race or ethnicity unless it is pertinent to the story. If it is relevant, the writer should explain why this is the case. I don't think an insinuation should be made that leaves it to the reader to infer an author's prejudice or insert his/her own.

In this case it was merely being descriptive, in case anyone saw these two wreaking havoc in the neighborhood again. Being partially Finnish, can I tell you that I love the aryan people with all my heart? But in the case of the Fox news cookie cutter blondes, well there is a reason they all come from the same distinctive mold I think and maybe one day at coffee I will point it out to you if you wish to hear.