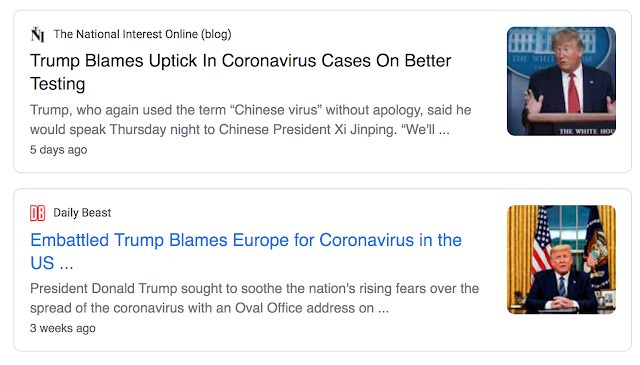 There's so many fingers pointed every which way it is hard to assign proper blame for the coronavirus. What's a person to do? Dr. Birx and Ivanka Trump say it's those damn millennials. Millennials blame old people. Senator Cotton blames China. Beth Cameron blames John Bolton. John Bolton blames both China and the angry left. Tim Morrison blames Obama for leaving the pandemic response unit with "bloat." Mitch McConnell blames democrats and their damn impeachment. Hannity and Ingraham put the blame on the shoulders of a liberal media doomsday cult. Breitbart blamed scientists for not "being good communicators." Limbaugh blamed wimp politics, which is liberalism. Preacher Hank Kunnamen blames abortion, for triggering god's wrath. Pence wants to blame the CDC. And Trump wants to blame everybody but himself. States, doctors, media, governors, past administrations, hospitals, democrats, Americans, General Motors, etc. As usual.  He's the bizarro world Harry Truman - The buck never stops here. I put the words Trump Blames into the Google search engine, got eleven full pages of citations... 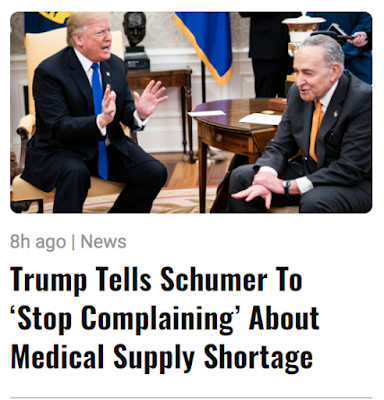 How bout everyone quit blaming anyone and all help one another. All work to a solution and be kind. If the top isn’t let’s us lead by example not by division!!

Robert, were all to blame. The blame game is not productive and does not help our mission. Continue to play politics if it makes you feel better. Every side has plenty of ammunition.

I keep it simple, I hate everyone equally!!

Three letters, all implying equal blame. I assume you are all happy with the Teflon Don's leadership style? Remember the book Profiles in Courage? What name would properly describe this sort of "I give myself a 10" leadership style? I didn't vote for him, you did, be accountable for his gross dereliction of duty.

Please read this article and tell me again how the Governor of Michigan has the balls, no the gall to blame Trump.
— APRIL 1ST, 2020... Michigan Governor Whitmer Complained About Lack Of Help From Feds, Hadn’t Asked For Major Disaster Declaration
By Hank Berrien Daily Wire.com —
Two facts should come to mind... First, the Gov forgot to make FEMA request, like many other State Gov... but did so after The Detroit Free Press pointed out her mistake. Second, the Gov (as of 30 March) hadn’t made a request for Medicaid/Medicare Assistance Wavier [but 40 other States have done so].
Neither of these fuck-ups is the fault of the Big Bad Orange Man... and thankfully California had the foresight to ask for both federal programs early on.

A real national leader works to pull the populace together, provides guidance and structure and accepts the responsibility that comes with power.

If Trump wanted a guaranteed re-election he might say, "Protecting the US is more important than who is president. I will cease all campaign activity and devote myself fully to this mission. The people can judge me based on how I lead the nation through this crisis." Then the RNC could run ads lionizing the dedicated prez. Something that simple would change minds. The way it is going, the country will see the absence of leadership and the failure to rise to the challenge. That will probably be enough to tip the scales against the Donald.

The bad orange asshole told Pence not to deal with her, made it clear that he wanted to have his ass kissed before he sent out money. So Desantis in Florida gets everything he wants and the governors he didn't like got squat or broken ventilators like California. What a way to run a country, Phantom.

another attack, another lie.

I'm afraid Trump supporters will never admit he does anything wrong. That's the sign of cult membership, not any politically based ideals. They can never, and will never admit any fault in him. There is no way to deal with people in a cult or speak reasonably to them, so I've stopped trying. There are still Germans who think Hitler was right. Trump followers are like that and will be with us forever. ~ Diane O

I blame...the virus...little shits get a free ride around the planet and get away
with, ahem, murder...well their time is comin'...gonna chloroquine their sorry asses
back to the crematoriums in the Wuhan labs where they came from. Gonna Boxer Rebellion
those little twits, and I don't mean Barbara.