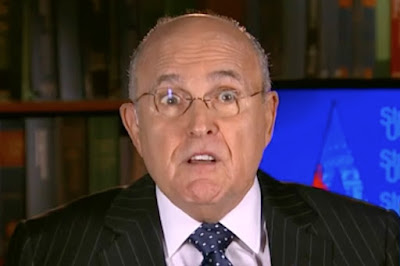 Like a bad wart or a nagging case of herpes, he was destined to slither out of whatever rock he has been hiding under. Ever wonder who put the information about the untested malaria drug under Trump's nose?


In his newly fashioned role, Giuliani — who was widely praised for steering New York City with a steady hand through the 2001 terrorist attacks — has solicited medical tips from a controversial Long Island family doctor with a following in the conservative media, as well as a former pharmacist who once pleaded guilty to conspiring to extort the actor Steven Seagal.


“We’ve got to take a little risk, god dammit, if we want to save lives. We are looking at a slaughter.” Rudy Giuliani

Rudy was on television recently hawking Hydroxychloroquine but he called it Hydroxyquintalone (sic). He said it was 100% effective and Twitter then blocked him for promoting falsehoods. Hey, he was close on the former anyway. Rudy had heard about a small study on the anti malarial drug done in France and rushed to tell the President. Unfortunately the lead researcher has a history of manipulating data. This study has been highly criticized in the scientific community.

The president is famous for listening to people who know absolutely nothing about their subject. God help us. His minions sound very desperate. Their decision making is both irrational and ill advised.

Giuliani said that he has not discussed the treatment with Fauci, but that Trump agrees with him. “I’m sure he thinks I am an ignoramus,” he said of Fauci.“They’ve thrown cold water on it because they are academics,” he said of scientists like Fauci. “ ‘You can’t blind test it.’ I know you can’t blind test it. But we’ve got thousands of people dying, sweetheart. And by the time you blind test it, we’ll have 100,000 people who are dead. Why don’t we get in the real world of being a doctor instead of being an academic?”

Next time you get sick and need help, call Giuliani or a social scientist or economist like Peter Navarro. They are obviously much more knowledgeable than medical doctors. Oh and he's hawking a new experimental stem cell therapy too. Is there anything that this guy can't do?

*
Real doctors at Mayo Clinic issue sudden death warnings about off use of malaria drug for patients with cardiac issues.

*
Pastor:  Trump has god's authority, so listen to him over his experts.
Posted by Blue Heron at 12:22 PM

My friend Linda in Oceanside lost her father, who lived in Scottsdale, three nights ago to COVID19. Linda's mother is in ICU now and not doing well. Both in their 80s. They were symptomatic for just a couple of days.

I'm sorry Jerry. Things were a little lax in Arizona. Ducey refused to shut down the private golf courses and the beauty parlors.

Cucaracha and Guliani are synonyms.